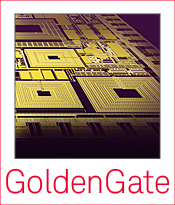 With SOA, GoldenGate 2017 enhances circuit reliability by automatically ensuring all devices operate within their safe operating areas – rules set by the PDK and/or the user. GoldenGate 2017 produces appropriate warnings, and highlights the failing devices in the schematic, simplifying the debugging process. This feature replaces tedious and unreliable manual checks.

The use of the new and fast TSMC silicon processes – 16nm FinFET or later – which all require TMI support, makes it possible to design mm-wave circuits with silicon. Doing so enables the mass production of transceivers employed by systems adhering to the upcoming communications standards. Now that GoldenGate supports TMI, users can take full advantage of many of GoldenGate’s strengths, such as robust simulation convergence and fast simulation speed, while designing the latest and greatest circuits.

Looking for another version? View other GoldenGate Product Versions.