R&D and test engineers who need to characterize serial interfaces of up to 32.0 Gb/s can use the M8061A 2:1 Multiplexer with optional de-emphasis to extend the rate of J-BERT M8020A and J-BERT N4903B pattern generator. For the most accurate receiver characterization results, the M8061A provides four calibrated de-emphasis taps, which can be extended to eight taps, built-in superposition of level interference and Clock/2 jitter injection. The M8061A is a 2-slot AXIe module that can be controlled via USB from the user interface of J-BERT M8020A as well as N4903B.

Emulate transmitter de-emphasis with up to 8 taps 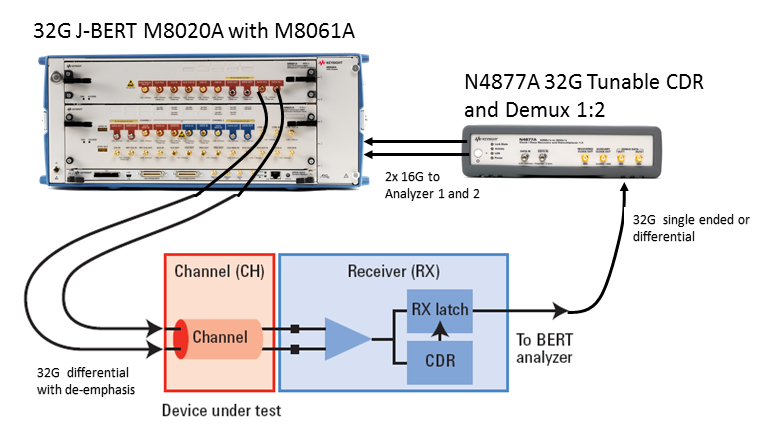 This setup shows how to emulate transmitter de-emphasis up to 32 Gb/s with M8061A and J-BERT M8020A. For a BER and jitter tolerance measurement up to 32Gb/s the N4877A CDR and de-multiplexer has to be used.

Minimizing the influence of the test environment is a challenge especially if bit rates exceed 20 Gb/s. To de-embed the signal degradations caused by cables, test fixtures, adapters, etc, the de-emphasis technique is commonly used. M8061A is the only instrument that offers up to 8 tap de-emphasis up to 32 Gb/s, allowing compensation of signal degradations in very fine steps.