How to Design an X-band MMIC PA Webcast

WHY THIS WEBCAST IS IMPORTANT 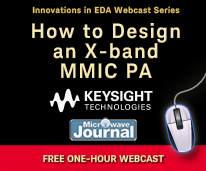 Active phased-array radars require numerous, small, efficient and low-cost Power Amplifiers (PAs). GaN technology offers transistors with high breakdown voltages and high maximum operating temperatures making them well suited to the realization of PAs. Typical output power requirement for each transmitting element of a phased array radar are around 5 to 10W. This is a relatively modest requirement for GaN, the key with this design was to implement a PA that is efficient and compact, as die area translates directly to unit cost.

This presentation goes step-by-step in describing how to design an X-band PA MMIC that covers 9 to 11.5 GHz using Keysight EEsof EDA’s ADS software. The MMIC has an output power of 7 watts (38.5 dBm) from a 29-dBm drive with a Power Added Efficiency (PAE) of 42 percent. The design was realized on the 0.25-µm gate length GaN on SiC process of UMS (GH25). The resulting die size is just 1.5 mm x 2 mm. In other words, around 2,300 PAs can be fabricated on a single 4” diameter wafer. Details of the design approach, the simulated performance, the layout, the electromagnetic simulation and optimization, as well as the measured performance will be presented during the webcast.

Stuart began his career at Matra Marconi Space in 1997 after graduating from UMIST. Here he designed Solid State Microwave Amplifiers (including a 500W, C-band unit). In 1999 he moved to Sony where he designed ICs for 2G & 3G cellular handsets including highly integrated Si BiCMOS transceivers, PAs and switches on GaAs processes. After eight years at Sony he joined a UK start-up Nanotech Semiconductor where he designed fibre optic receivers in CMOS. In 2009 he joined Plextek, becoming a member of the RF Integration Group, which became a separate line of business in November 2012. His main work has been the design, layout, packaging and evaluation of custom GaAs and GaN MMICs at frequencies up to 40GHz. These have included broadband Ka-band receiver and transmitter ICs, broadband amplifiers, mm-wave PAs, mm-wave phase shifters, GaN HPAs and mm-wave MMICs for 5G Front-End Modules.

Location: At Your PC

For more information: Enroll to view the March 2, 2017 recorded broadcast

Prices shown are list prices and are subject to change without notice.