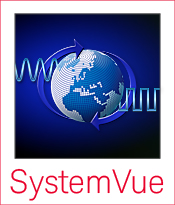 The 802.11ad personality of the W1915 library is interoperable and consistent with the Keysight 81199A Wideband Waveform Center software, which is a standalone test application. While the W1915 is intended primarily for simulation-based validation of 60 GHz standards, it is also capable of interacting with test equipment, through SystemVue’s instrument connectivity.

Figure 2. A simple closed loop BER test is performed on a simulated 60 GHz 802.11ad physical layer to validate system performance prior to hardware and vendor commitments in a video streaming application.

Figure 3. SystemVue can be used to validate realistic 60 GHz system scenarios in early R&D that would be very difficult to build and measure. For example, a CMOS RFIC PA model from Keysight Golden Gate is verified prior to tapeout. 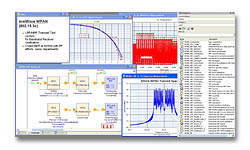 The W1915 mmWave WPAN Baseband Verification Library can be added to any SystemVue environment or bundle.